In a small central Italian town where Tuscany meets Umbria there is a street that bears the name of a British artillery officer. The story behind the commemoration begins and ends with an extraordinary Renaissance masterpiece.

Tony Clarke saw action against Rommel's Afrika Korps before the push northwards through Italy. He witnessed the devastation of Monte Cassino, where the great 10th century hilltop monastery was utterly destroyed by relentless allied bombardment. It seems that this memory coalesced with an older recollection to explain what happened next.

During the Italy campaign the artillery were tasked to ‘soften up’ towns before ground troops moved in. Clarke was the officer responsible for Sansepolcro. The ordinance dug-in and all was prepared. But the officer couldn’t bring himself to issue the command to fire. What had come to mind was a half-remembered account about a painting - in this place.

In an essay Aldous Huxley had described the visceral power of The Resurrection, a fresco painted by Piero della Francesca. "We need no imagination to help us figure forth its beauty,'' Huxley wrote. "It stands there before us in entire and actual splendour, the greatest picture in the world." (Aldous Huxley, ‘The Greatest Picture,’ Along the Road, 1925) 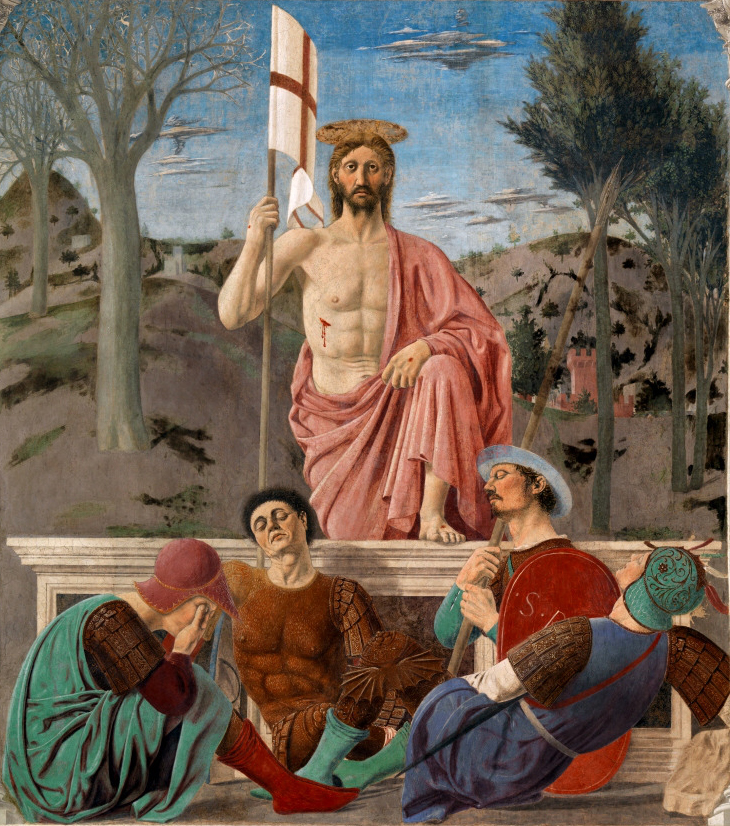 Clarke withheld the order to fire. He later said his commanding officer had come on the radio urging him to “get on with it,” but he continued to stall for time, assuring his commander that he could see no German targets to go after. It was a brave, perhaps foolhardy, action. Had Allied infantry been ambushed as they advanced on Sansepolcro, the consequences would have been terrible, but Clarke kept the guns silent. As it happened the Germans fled and the town was liberated the following day. Later, much later, the officer was honoured by the townsfolk – for saving their town and their painting.

Much has been written about Piero della Francesca, a son of the town, who worked, for the most part, locally (not for him the pull of Medici gold in the Renaissance hothouse of Florence). His paintings are carefully composed, sometimes ambiguous, always thoughtful and thought-out; drawing on the very latest developments in spatial organisation (representing three-dimensional space on a flat surface).

There are numerous articles devoted to this one painting but whilst the curious angle of the spear, the daring foreshortening of the foreground figures or the symbolism of the background foliage may occupy the minds of art historians, for me there are two reasons why I spend winter evenings working out the practicalities of getting to Sansepolcro by public transport (it isn’t easy – but maybe - one day - I’ll make it!). 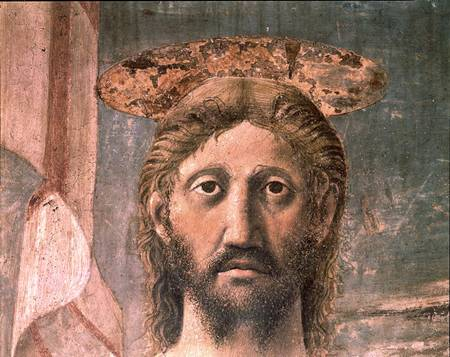 Firstly, it’s that face. The broad, not quite straight nose, the slightly twisted mouth, the wispy beard, the pallid (dare I say bruised) complexion and most of all those tired eyes, heavily ringed. This is a man who is one of us, unperfected by the artist’s brush; this is a man of labour – a son of Nazareth or Sansepolcro; and, unquestionably, a man who has been through much – in common parlance, and in truth, to hell and back.

And, secondly, it’s the where and wherefore. This is not a church painting, but adorns the wall of the council chamber. So it was that councillors, magistrates and governors of the town whose name means "Holy Sepulchre" would meet, as it were, in the presence of their risen Saviour. But there is more to it than this. It’s a large fresco, something over 2 metres high, painted on the wall opposite the double doors that open out onto the medieval market square. With this in mind return to the detail of the painting and see that the head is upheld, resolute, outward looking. This is a Saviour looking out to the market place, the community hub, the centre of things. This is a Redeemer, who has been through the very worst of it – for such as us. And risen victorious!