This is not good news, so we'll get straight to it. Nestlé have told us that from October they will stop using Fairtrade cocoa and sugar for KitKat bars.

For those cocoa and sugar farmers, the timing is terrible. With the global health and economic crisis threatening their future, co-operatives representing 27,000 farmers now face losing almost £2m of Fairtrade Premium each year, along with the security and power Fairtrade has offered over the past ten years.

The affected farmers we've spoken to have told us they want to remain Fairtrade. And the Ivorian Fair Trade Network has today released a powerful letter, which we've shared on our website, explaining why this is such a damaging decision. 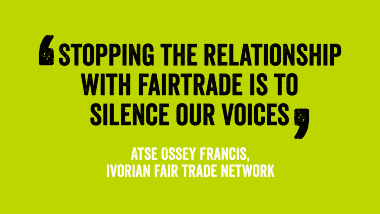 The Ivorian Fair Trade Network chose to speak out because Fairtrade offers these farmers a secure, fairer income and the power to decide how to spend that income.

We're deeply disappointed Nestlé have failed to promise farmers that this income and their decision-making powers will be protected in future.

Just last year, we saw a 23 per cent increase in Fairtrade cocoa sold in the UK, including new commitments from Lidl and Waitrose and Partners, and over 50,000 of you told our government all cocoa farmers deserve a Living Income.

And 10 years of Fairtrade KitKat has made a big difference on the ground too.

For example, Ivorian cocoa farmers have used their KitKat Fairtrade Premiums to build more classrooms and dispensaries, as well as investing in support for women to grow their businesses.

We need to make sure that the voices of farmers losing these benefits are heard loud and clear.

That's why we're sharing the Ivorian Fair Trade Network's letter today, and why we've been listening to farmers who'll be affected by this decision to understand how we can offer our support.

We’ve spoken to farmers as a priority so we can represent their concerns, but we also want to hear from you.

How do you feel about this decision? And what do you think needs to happen now? Tell us by filling in this quick form, or by replying to this email. And watch this space for more ways to support the affected farmers very soon.

TELL US WHAT YOU THINK

Make no mistake, if Nestlé don't reverse this decision farmers will lose out. So now more than ever, we need each and every one of you to keep choosing Fairtrade and speaking up for farmers.

Thanks for your support - we'll be back in touch soon.