Reasons to smile.
The bin men solemnly bowing as they are applauded in the street.
The incredulity of the Amazon delivery man as he delivers our regular (four times a year order) of … toilet rolls.
A 10 litre tub of magnolia paint (this definitely doesn’t make the rest of the household happy!).
And a family, the two young children with scooters, who slowly, so slowly, walk down our road on the way from the park.

God of us all,
as we recalibrate our lives
to fill the empty days
help us:
to smile with strangers on our solitary walks,
to put a smile in our voice as we telephone old friends,
to smile with supermarket staff
and the home delivery drivers.

A long introduction to a short prayer, so please bear with me.

Yesterday, Thursday, UK radio listeners formed a nationwide ‘choir’ as five stations teamed up for a ‘communal’ singalong. The BBC website reported that

‘For the first time, Radio 1, Radio 2, 6 Music, 1 Xtra and Asian Network all broadcast the same programme, designed to lift spirits during the lockdown. "This is a unique moment," said Radio 1's Greg James. "Isolation doesn't mean you have to be lonely."’

Songs were suggested by listeners and Radio 1's audience submitted Florence + The Machine's You Got the Love. The song happens to be one of my favourites, although I prefer (as would most folk of my generation) the versions featuring the American soul singer Candi Staton. It’s one of those songs that never really goes away, and I think I know why. Somehow, despite the dance-beat rhythm, it’s the words keep breaking through; and the words are a prayer, let’s take two of the verses:

Lord,
Sometimes it seems to me the going is just too rough.
And things go wrong no matter what I do.
Now and then I feel like life is just too much.
But you've got the love I need to see me through…

This dreaded virus may be a bind
when making some folk to seem unkind.
But as time passes, change is happ’ning,
for panic buying is now ending,
and queues are patient, and people kind!

Crossing roads are not so hazardous!
The air is cleaner – that is glorious!
There is time to think; be more curious
about how to fill the time we have -
keeping us and others humorous 😊

Jobs suspended for so many workers;
some work longer for sake of others!
We clearly hear the cost some pay
so that others might live another day!
Care shown and received – so tremendous!

When I raise my eyes to the skies
Somethings missing, then I realise –
there are no planes, just birds I now spy!
Less kerosene laden rain will fall,
and air pollution will fail to rise!

So with isolation in its place –
we can still give thanks for God’s good grace!
If we really do look we can trace
Dark Clouds that have a silver lining,
For in them we may find God’s embrace!

Let us hope that the leaders and politicians of our world finally realise that our wealth is most useful when it’s spent answering the world’s peoples’ needs rather than on obscene profits for the few who are profiteering at others expense!

May God bless us each and everyone, and enable us to be a blessing to others.

The maple tree that (against advice) I cut back in the autumn
has, at last, a tint of colour as buds begin to open.
My (reckless) end of season ‘pruning into shape’
and now the breaking out of leaf
sets a reddish arch before the dull grey sky.

For this season of new growth
we thank you Lord.

For natures capacity to make new and repair
we thank you Lord.

For the day-by-day transformations in garden and field
we thank you Lord.

And as we look forward to sunnier days,
the warm colour palette of springtime,
may we be hope-filled.

Some of you will know that I visited Sierra Leone only a few weeks ago. Lots to share about the Methodist Church there but in particular about a Methodist hospital in one of the provinces.
They were very much involved in fighting the Ebola outbreak there. 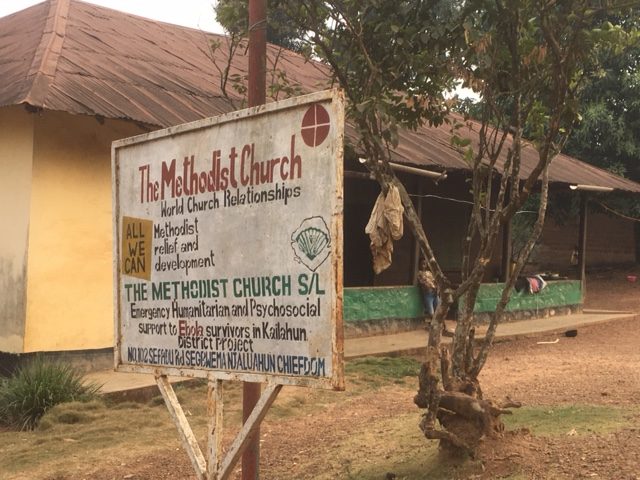 There is one doctor who can’t remember the last time he had a break and who deals with every ‘speciality‘ you can name. 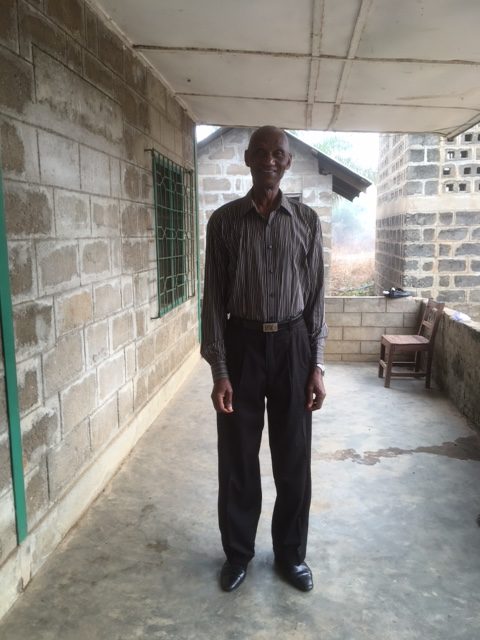 They have clean, but not running, water and solar powered electricity. The equipment available is almost non existent. 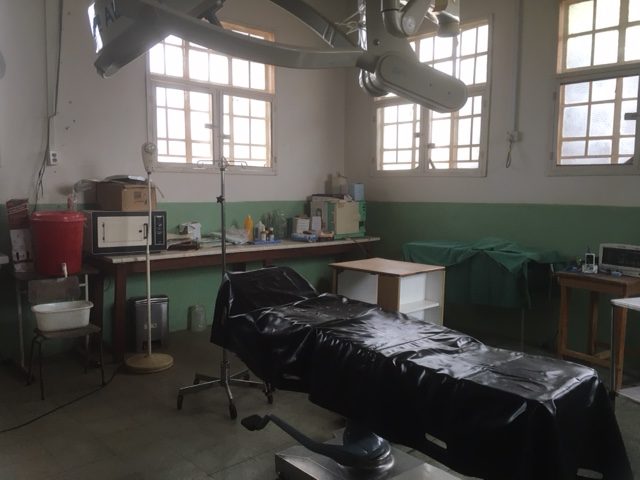 In the email I had from Bishop Mark last week he said he was sitting with the hospital administrator trying to work out where they could find the money to buy hand sanitizer for the hospital. A donation from some of our friends arrived at the same time!

Today he writes that there is now one confirmed case of Covid 19. Everyone in the country is very scared.

During the Ebola outbreak the country had a lot of help from Britain and other countries. They know this cannot happen now.

Please pray for the people of Sierra Leone.
If you can think of anything else we could do to help, please contact me.

For the keen eyed, yesterday’s prayer included the wrong sort of weather (now corrected - thanks Dave). Which got me thinking.

Whether we are isolating alone
Or in a free-form family
God will find us.

Whether we are trapped inside
Or dutifully walk the dog once a day
God will find us.

Whether we are on the front line
Or just down
God will find us.

Whether we are blessed with toiletries
Or right out of toilet roll
God will find us.

Whether the weather is sunny and warm
Or registers wind chill
God will find us.

Seeking, searching, shepherding God,
May we sense your presence today.

In the dead of night I heard a diesel engine idling,
it must be the milkman.
I reached for the alarm clock,
the illuminated dial read 1:35.

Half awake and half asleep
I make my way to the front door
and brought in the 4L bottle.
Attached was a note:

‘I have received a huge number of new calls
from people who are self-isolating
and in need of milk and other products,
to accommodate this, I am altering my delivery days …’

One bloke who has struggled for years to maintain his round
doing his best to help.
I return to bed, thankfully
thinking of him on this bitter-cold night.

Then my thoughts turn to others
who work through the hours of darkness.

I call to mind my parents –
like so many who are frail and lost
(living in a time-slip landscape of confusion) –
and the night staff, their carers.

All carers, who in Lock-down carry
the full responsibility for love,
transmitted in the still-understood language
of smiles and hand-holding.

Lord,
we hold with thanks and gratitude
all who work, who care, who give of themselves;
those who – whether they know it or not –
inch us nearer to your coming Kingdom.

A Reflection by Michael Mays (and Pope Francis), 30th March 2020

We have pinned to our kitchen clipboard a Rome metro ticket. The ticket carries an unusual strap line ‘Roma salute Papa Francesco 13.03.2013’ – the city’s warm and respectful welcome to the new pope. The ticket reminds us of the Eastertide we spent in the city, when we joined with a crowd estimated to number 250,000 in St Peter’s Square. It was a joyous moment, with spontaneous singing and the crowd hanging on every word. All we could take from it (having no linguistic skill) was being part of something tremendous. I like to think that he waved to us – as an ecumenical gesture, but I might be mistaken. Part of the pope’s address that day was the Urbi et Orbi, a solemn blessing to and for the world.

On Friday last, Pope Francis stood entirely alone before the Basilica of St Peter. It was poignant to see this old man, alone, with the colonnaded square entirely empty, in the pouring rain offering words of hope and consolation to the world in desperate need; and to recognise that same blessing which had been shared seven years ago. He concluded his address with these words:

From this colonnade that embraces Rome and the whole world, may God’s blessing come down upon you as a consoling embrace. Lord, may you bless the world, give health to our bodies and comfort our hearts. You ask us not to be afraid. Yet our faith is weak and we are fearful. But you, Lord, will not leave us at the mercy of the storm. Tell us again: ‘Do not be afraid’ (Matthew 28:5).

The Well, Kibworth, holds a monthly Night of Prayer on the last Friday of the month. On the Friday just gone, we prayed at home and below are a couple of the prayer suggestions from one of the prayer team, Lucy Bloomfield.

TRUST, instead of fear, for provision (both physical and spiritual) - God provided for His people day after day in the wilderness. If they tried to stockpile - it just went mouldy. Jesus told us to ask the Father for our daily bread. Take each day, and our daily bread, one day at a time.

‘Doors are closing, literally - Schools, restaurants, church buildings, leisure centres... BUT doors of opportunity are opening! May hearts and minds also be open to God’s call and the Good News. Church without walls!’

This entry was posted in Praying on March 30, 2020 by Administrator.

Thomas the Twin has acquired the nickname ‘doubter’. This morning’s long Gospel (John 11: 1-45) encourages us to look again. When Jesus says to the disciples that he is going back to Judaea, the place of imminent danger, it’s Thomas who says to the others, “Let us also go, that we may die with him.” (v. 16)

The story of the raising of Lazarus is sandwiched by the Gospel writer between two texts referring to the plans of Jesus’ opponents {...they tried to arrest him (10: 39) ...orders were given by the chief priests and Pharisees to arrest him. (11: 57)}

Forty years ago this month St Oscar Romero was murdered while saying Mass in a hospice chapel, because he wouldn’t be silenced by the oppressive government of his country. This morning’s Radio 4 service at 8.10 a.m. from Wesley’s Chapel centred on that event of forty years ago.

Yesterday evening Channel 4 broadcast Helena Bonham Carter’s search for the story of her grandparents’ experiences during World War Two. A Jewish maternal grandfather who was a Spanish diplomat defied the instructions of his anti-Semitic government in Madrid to fast-track the visa applications of Jewish fugitives fleeing Paris through Bordeaux after the rapid German invasion of France. He was demoted in disgrace by the fascist authorities. But, for him, morality had to override civil obedience. Meanwhile Helena’s paternal grandmother Lady Violet Bonham Carter refused to flee from her London home during the London Blitz. She put her life on the line as an Air Raid Warden. She later found her name on the Gestapo’s ‘hit list’ because of her efforts to assist Jewish people fleeing Nazi occupied lands.

They all stand in a line with Thomas the Twin. The passage from John’s Gospel on Radio 4 this morning brought us these words of Jesus: “Those who love their life will lose it, and those who hate their life in this world will keep it for eternal life.” (12: 25) Romero and the disciple Thomas both showed the path of costly service. So did Helena Bonham Carter’s grandparents.

Jesus accepts us, with all our limitations, if only we will trust him when he calls. And all who serve us through this dangerous Covid-19 crisis are surely honoured by the Father also. (see John 12: 26)